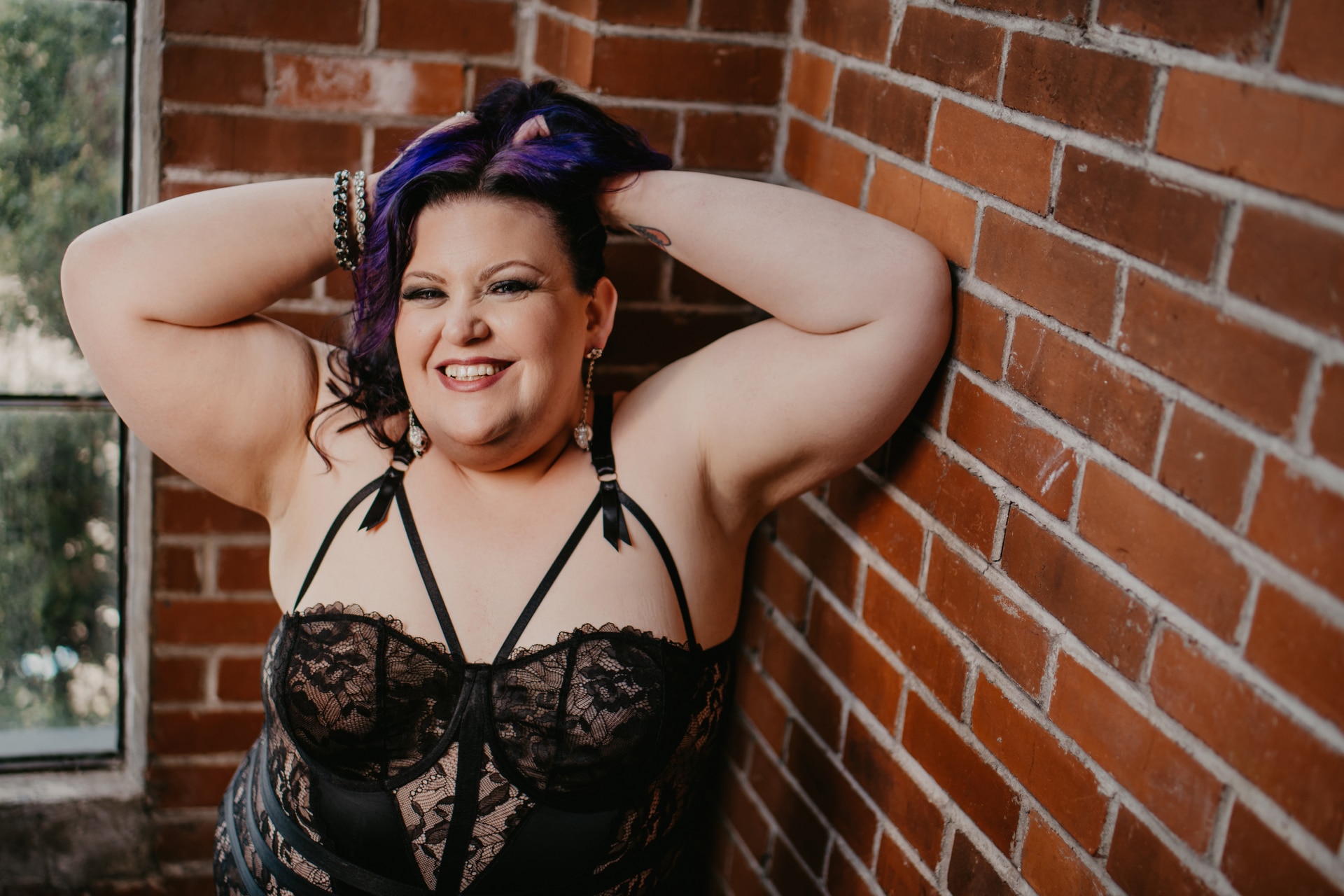 We’re always honored when our clients tell us how beautiful and confident we’ve made them feel, but it breaks our hearts that so many of them tell us that this is the FIRST time they’ve ever felt this way.

“I’ve been overweight literally since birth. I’ve never been able to keep weight off no matter how hard I tried and I was constantly bullied for it. My entire life, I was told that big equals bad and gross and ugly. People in media never looked like me. I was bullied from kindergarten through twelfth grade. I was the “DUFF” (Designated Ugly Fat Friend). Even my family would always tell me, ‘You’d be so pretty if you lost weight,’” says Janet, who is literally one of the sweetest people we’ve ever met and recently did a solo boudoir session with us.

“I guess at some point, I made peace with that being the truth. I saw being attractive and being overweight are mutually exclusive states of being. I felt that because of my physical size, I deserved to be less of an actual person. I have almost no pictures of me because I just see how big and wrong I am in them.”

Janet, who is 42 and has held the same job for almost 20 years, says she’s always put others first before herself.

“It took me 13 years to earn my BA because I kept taking breaks to help care for loved ones. We lost my mom to cancer in 2018, and I’m the person who ended up caring for her for the month she was on at home hospice. I definitely embrace the mom/caretaker role. So much so that it trickles into my friendships,” says Janet, adding that one of her favorite things to do is just hang out at home with her friends and cook them their favorite meals. “I try to keep a warm and inviting atmosphere.”

In 2004, Janet entered into an emotionally abusive relationship that thankfully she has since left.

“I know now I was only there because I settled. I was at my biggest weight when we married in 2007 and I was convinced I had no worth and nobody else would want me. I had RNY gastric bypass in 2009 at the suggestion of a reproductive specialist. I got pregnant in 2010 and gained back the 80lbs I had previously lost – but I also gained an incredible miracle baby, my daughter, Emma,” she says.

As the years went by, Janet’s ex began to grow violent.

“I realized I didn’t even like the man I was with, let alone love him. I threw him out in February 2015.”

Janet is now happily engaged and lives with her and her fiancé in the house she grew up in.

When Janet saw an ad for Allebach Photography and our solo boudoir sessions, she says she realized it was time to see herself through someone else’s perspective.

Her best friend helped convince her that not only did she deserve this, but that since “there was no way she was going to get nude” that it would be no different from a vacation picture in a bathing suit!

Janet says she was shocked by “how comfortable I was wearing next to nothing in front of two strangers. And although I loved some more than others, there was not one picture of me I hated (a huge change of pace for me).”

She continued, “I thought I was going to be too reserved and awkward to pose correctly. I thought I’d feel funny and not get any good shots. I was so very wrong. Mike and Erika had me at ease and posing like a pro in no time flat.”

Janet could barely believe she was looking at herself when she saw her photos. She looked like a beautiful, take charge badass!

“I was at a very low point with self esteem and seeing my artwork really helped. It’s for sure a HUGE confidence booster. Even during the session itself. I can’t remember the last time I got so many compliments.”

She continues, “This experience absolutely changed the way I see myself. I wasn’t gross. I was just different. I conveyed confidence, charisma and charm. Dare I say, even sexiness. Do I have a ‘normal’ body? I sure don’t. But for the first time, it clicked. Different is not bad or gross or ugly. Different is the way I live every other area of my life. It took me a while to get there, but I embrace being different. All of my idiosyncrasies are what makes me who I am – love it or leave it. So now it’s time to think about the outside the way I think about the inside. It’s time to start feeling less than and time to start wielding confidence. I won’t get there overnight, but for the first time, I think I’m moving in the right direction. There is no way I’d be here if I wouldn’t have done boudoir.”

Having trouble seeing your own inner beauty? We want to help show you what you’re missing! Book your solo session by calling 610.539.6920 or by visiting http://allebachphotography.com/contact/