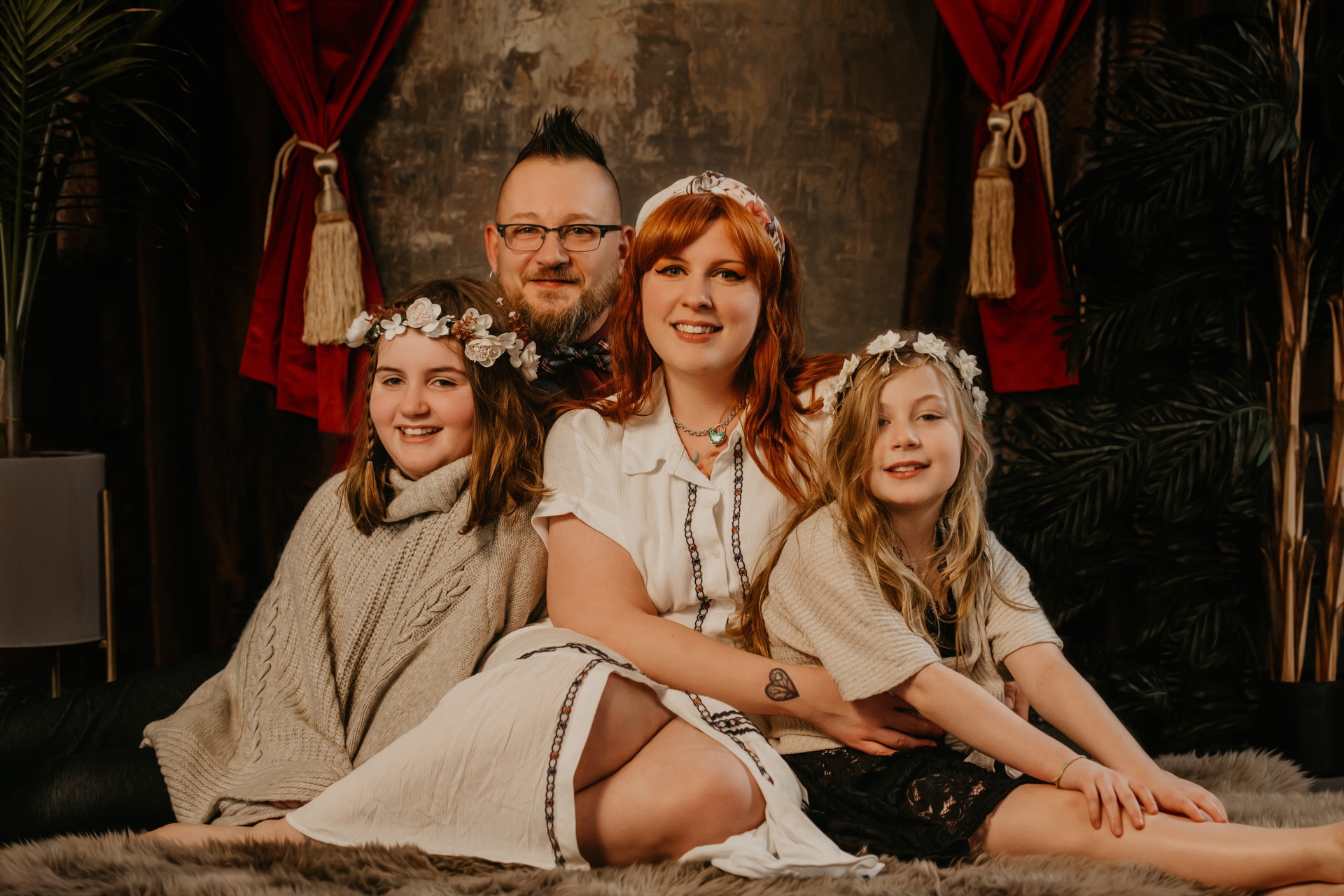 Stephanie fondly calls her family “our puzzle-piece family.” Her two girls, who are 9 and 10, were born in Ireland to their Irish father. When her husband passed away in 2015, Stephanie and her girls moved to the States (New Jersey), where she soon met her now fiancé Rich. The two dated for a year before Stephanie felt it was time to introduce him to her daughters.

“I wanted to make sure it was right before he met them after everything they had been through,” she said.

It didn’t take long for Rich to bond with the girls and much of it was done while he looked after them so Stephanie could complete her studying and schooling for Massage Therapy.

Then, a little over a year after he met and fell in love with the girls, Rich was suddenly diagnosed with Stage 4 Hodgkin’s Lymphoma.

“It was scary and devastating because we had no idea what the outcome was going to be. We were due to get our first proper photos together that year but his hair fell out from the chemo so we held off-he hated how he looked without hair,” said Stephanie.

Thankfully, shortly after Christmas 2019 Rich was given a clean bill of health. The cancer scare only fueled their desire for photos together even more.

“Once I started seeing the photos being created for the Renaissance of Mom, I knew that was something we needed to be a part of. We wanted so desperately to have “real” photos together; we didn’t have any nice photos of the four of us. After all we had been through, it was definitely time to celebrate our puzzle piece family.”

She continued, “We have become so close, so essential to each other. I took care of him. He took care of the girls as I went through school. He’s taken sick days for them and comforted them while they were still very raw in their grief over their father. Some days I feel like he is our second chance at life. I didn’t really believe we could truly ever be happy again after their Dad passed away. But here we are. He said he has spent many nights being grateful that he has been given the gift of us, even though it was through tragedy.”

After a few more postponements due to snow, we finally got the four of them into the studio for their long awaited session.

“Erika instantly became a friend. When the day finally came I couldn’t help but hug her when we met in person. We just sort of fell into playing around and joking around. That’s when she started shooting.”

As Erika took their photos, Stephanie says moments like watching her beautiful girls laughing and looking lovingly at Rich are now suspended in time for her.

“I remember Rich having an especially quiet and beautiful moment with our youngest in his lap and Erika turned around to look at me…we were both crying…then of course at that moment the oldest farted and we all erupted in fits of laughter. Kids really know how to interrupt a serious moment!”

Stephanie added that, like most moms, she rarely sees herself in photos with her babies.

“I’m one of those moms who is never in photos. Accepting that even though I don’t look perfect…I am beautiful as I live within the joy and love in my perfectly imperfect family.”

When it came to their photo reveal, Stephanie says she sobbed uncontrollable, cathartic tears.

“It was like this physical turning of a page…having gone through such deep grief of losing a spouse, then finding love again and fearing losing him to cancer, all the while watching my girls grow and experience such pain that no children should ever know…to finally being ok. Happy and healthy, all of us.”

The family selected some of their favorite prints and plan to purchase more in the future after their wedding this fall. (Fittingly after their Renaissance session, they will be married at the Renaissance Faire in Manheim, PA.”

“This shoot was just so unique and perfect. The Renaissance style completely broke the mold of traditional and mundane family photos. The photos Erika took speak volumes of love, passion, and life. I could’ve spent an eternity in that day…laughing and not worrying about a thing. I can’t thank her or Allebach enough. We will treasure these photos for years to come! Thank you so very much.”

Celebrate the renaissance of your own family! Book your own session by calling 610.539.6920 or by visiting http://allebachphotography.com/contact/