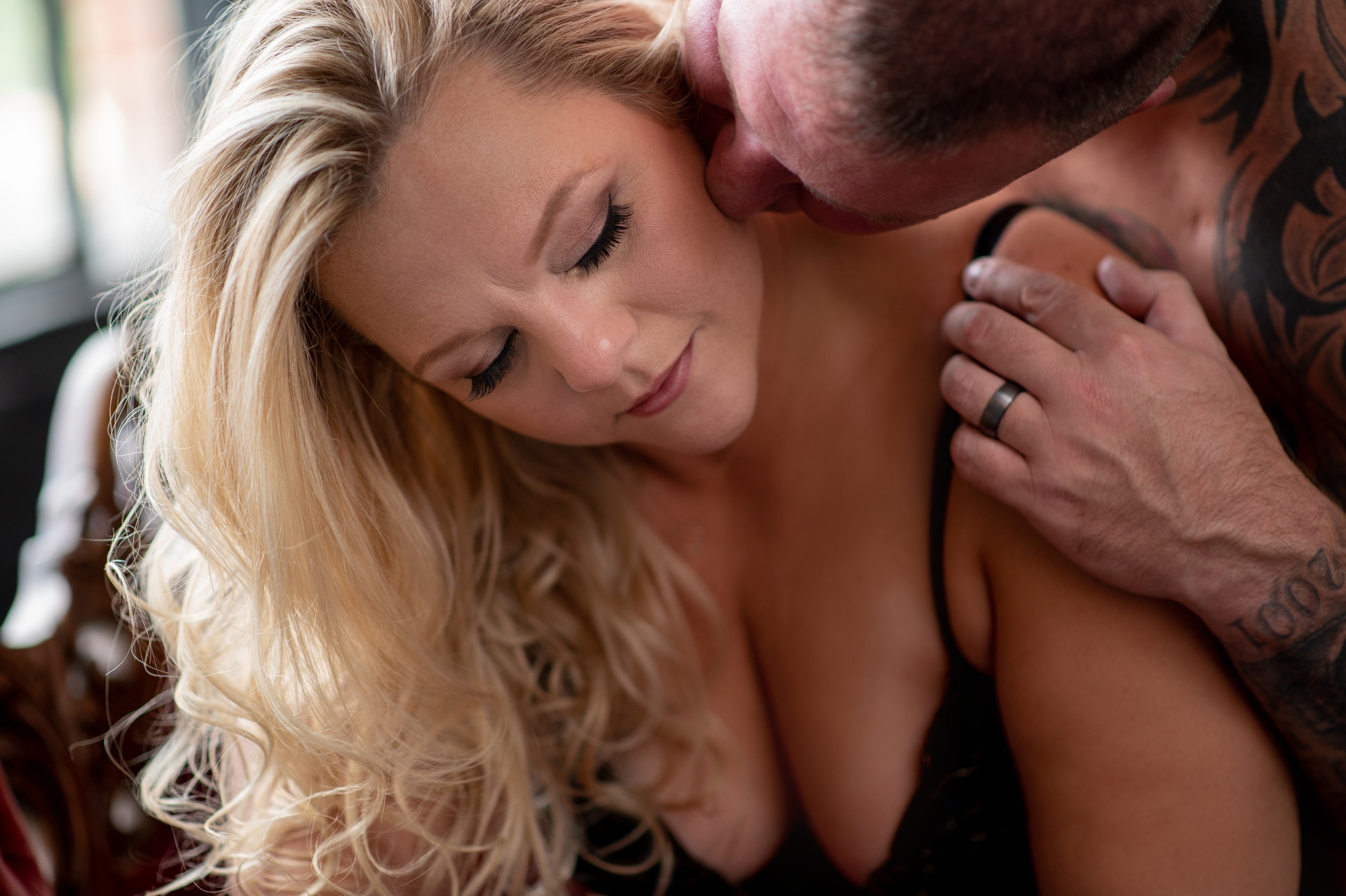 Ron and Michelle are the perfect example of finding love after a painful breakup or divorce.

The two met years ago through mutual friends but at the time were each in their own respective relationships. Though they sensed an attraction, they never acted on anything until both relationships ended; Ron ended his and Michelle left an emotionally abusive marriage.

“We found ourselves leaning on one another due to the similar struggles we were both having trying to rebuild our lives,” Ron explains.

That friendship and connection would soon grow into something more After years of checking each other out from afar, the two eventually spent their first night together.

“It was absolutely amazing, both physically and emotionally. There was such an immediate connection for both of us in every way,” Michelle says.

Initially, Michelle joked that Ron would be her “hit and quit,” neither of them intended for anything more serious to develop.

“We now so lovingly say our “stupid feelings” got in the way of all that! We loved that term so much that Michelle had it engraved on the inside of my wedding ring,” said Ron.

From there there was no stopping the couple; they continued to fall in love with each other and Ron was seamlessly integrated in Michelle’s family, of which she has three children.

“The kids accepted me quickly and soon we found ourselves enjoying the company of each other and the kids. I also found myself falling in love with the kids just as much as I had fallen for Michelle,” says Ron.

“Ron has also loved the kids and treated them like his own which is something every single mom will tell you is absolutely everything,” says Michelle. “

After all these years we truly have created a loving family of our own. We have both said that our one regret in this relationship is that we didn’t have the chance to meet each other sooner in life and grow a family together from early on.”

Ron continues, “Our love is something that we both had always wanted and imagined a love was supposed to be. However, as is usually the case, life has its own plan for you and you just end up settling for what you have at the time. Which is exactly what we both did for so long. In my case that settling left me wanting a partner that not only fulfilled me physically but emotionally as well. In Michelle’s case it left her damaged and broken in many ways after years of psychological abuse.”

When Michelle came across one of our model calls for a Couples Boudoir Session social media, she decided she really wanted to capture her love with Ron and all it represented. While Ron admits he was a little reluctant at first he says it was Michelle who was the more nervous of the two going into their session.

“Even though I believe that she is amazing in every way, she struggles to see in herself what I do,” he explained.

Michelle says that Mike, along with Ron’s calming presence immediately calmed her.

“We ended up having a blast with Mike and the photo shoot. He made us feel so comfortable and at ease, that we just lost ourselves in each other. We had such a fun time changing outfits, taking Mike’s direction for photo shots, and creating our own spin on several photos we ended up taking and buying. We really let ourselves get into the moment and at times forgot Mike was even there taking photos of us during some of our most vulnerable and somewhat intimate moments,” said Michelle.

As far as a twist, Ron surprised Michelle by bringing two football jerseys.

“My family grew up in South Philly, so naturally I am a die hard Eagles fan.  Michelle is a transplant from Chicago, so naturally she’s a Bears fan!  I brought both an Eagles and Bears jersey which we took photos in,” he said.

The couple cried when they sat down to view their photos afterwards.

“Michelle and I both couldn’t believe that it was actually us in those pictures. We are just your average couple with many flaws. But through the photos we saw exactly what each other finds so incredible about the other person,” said Ron.

Though it was difficult to pair down their favorites, the couple purchased an album.

“It was very hard to continue to narrow down the photos because all of them were so great.  But in the end we agreed we picked our most favorite ones. Some of our favorite photos were me on my knees kneeling before Ron, the sensual kisses from behind by Ron on my back and neck, and of course the football jerseys photos!” says Michelle.

After all said and done, the experience was amazing, sensual, loving and fun.

“Mike is truly an artist with his photos!  We would say we came away closer, and even more into our love for one another then before this experience. It’s hard to put into words what the experience brings to your relationship, but Mike really does an awesome job making you feel relaxed and let you be yourselves and show your love for one another in the most organic way possible,” says Michelle.

After they were finished, the couple both signed the bathroom wall with their feelings.

“My message left to others was, ” Stay In The Moment, Stay Into Yourselves, Stay In Love.” We think that sums up the entire experience perfectly!  We came away with such great memories, fantastic artwork, and an experience that we never could have expected would be so beautiful!  We are so happy we did this!” Ron says.

“The only thing we want to get out there to others thinking about doing this is that you don’t need to be a model, skinny, or perfect to be photographed in your best light!  Be who you are and love who you are, both individually and together!  Show the world your love and screw what everyone else like ‘one star Cheryl’ may think of you!”

Book your couples boudoir session by calling 610.539.6920 or going to http://allebachphotography.com/contact/

Christine Wolkin is a freelance writer and writes for Allebach Photography. Learn more about our studio at Allebachphotography.com or by texting 610.539.6920.