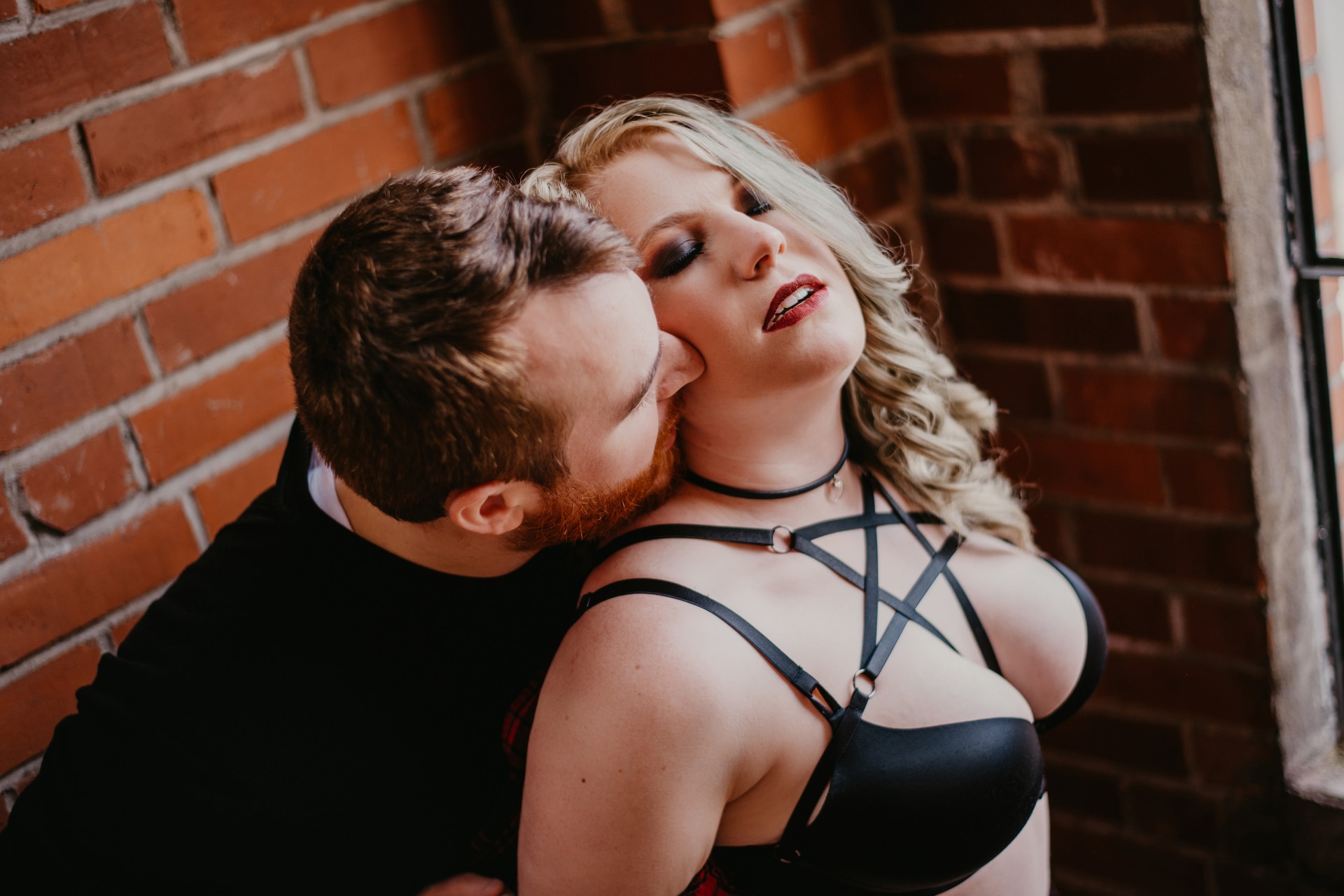 We love couples that break the mold and that’s one of the reasons why we had so much fun with Megan and Jake.

The two felt an instant connection from the moment they met two years ago, through a mutual friend.

Megan says, “I was a newly single mother at the time, and very hesitant about entering a new relationship. Jake was so patient and kind. He loved me through a time when I was still learning how to love myself. Fast forward two years and I can’t picture my life without him in it.

Megan was so in love with Jake that this past December she decided to get down on one knee and ask him to marry him.

“We couldn’t be happier.”

Early on in their relationship, Megan shared the Allebach Photography page with Jake and they’ve both been dreaming about doing a couples session ever since.

“It was something we talked about as a ‘someday-goal’ frequently but with raising a four-year-old, having the time and money to actually make it happen seemed impossible at times. Especially considering that we live six hours away from the studio, in Erie,” says Megan.

As their two-year anniversary began creeping up they wanted something really special to celebrate. They had talked about taking a vacation but then it hit them.

“We NEEDED to do this, to turn this two-year dream into a reality. That’s when we booked our session and made the commitment to travel across the state for this experience. At the time, I had not decided to propose yet. In the end our images ended up being a celebration of our love in place of traditional engagement photos!”

Though they were both in from the get go, Megan says the nerves were real the days leading up to their session.

“Mine were definitely worse. Ever since having my son four years ago, I have struggled with body image and most of the time I’m the one hiding behind the camera, so stepping out of my comfort zone took a lot of courage”, she explained. “On top of that, being the photography nerd that I am, I was SOOO nervous to meet Mike in person! I follow the work of many talented photographers for inspiration just to admire their artistic abilities. I’ve always been extremely drawn to the beautiful images Mike creates and he quickly became one of my absolute favorite photographers. Meeting my favorite photographer in person felt like getting to meet your favorite actor or rock star. I was totally starstruck and awkward at first.”

Despite their initial nerves, Megan and Jake had a blast at their session, which was filled with giggles and silliness to go with their vibrant sensuality.

They started out with comfy/casual outfits that they could slip layers off of, then moved to a more polished look where Jake wore his best suit and Megan wore some sexy lingerie. They also brought along a few props to enhance the overall aesthetic of the session.

“One of our favorite photos was of me pouring Jake a glass of Maker’s Mark Whiskey. It looked like it belonged in a magazine!” says Megan.

Megan says she felt so comfortable during the session that she even surprised herself by stripping all the way down for a few full-nude shots.

Then came the photo reveal.

“I was not at all prepared for the intense emotional response I had seeing our images for the first time on that great big projector screen. Mike truly captured the love and intimacy between the two of us and getting to see how beautiful that was and how amazing we both looked was so overwhelming that I couldn’t stop crying.”

The couple purchased an album and are still trying to decide which images to use for their wall art.

“We love them all so much it’s hard to decide which ones to choose for wall art, but we are planning on purchasing a set of the metal prints for above our bed, once we decide. A few of our favorite shots are all the ones where Jake is in his suit and I’m in my red lingerie, and the ones in the stairwell, but it’s hard to choose favorites when every image is AMAZING.”

They left the session feeling more connected than ever as a couple.

“Our sex life has been better than ever and we both feel more confident in our own skin than we ever had before. I love myself a little more now and that feeling has been life changing”, Megan said.

“To anyone out there reading this thinking, this sounds so fun but are unsure about doing it, take a leap of faith and trust the process. I guarantee you won’t be disappointed!”

Book your own couple’s boudoir session by calling 610.539.6920 or by visiting http://allebachphotography.com/contact/